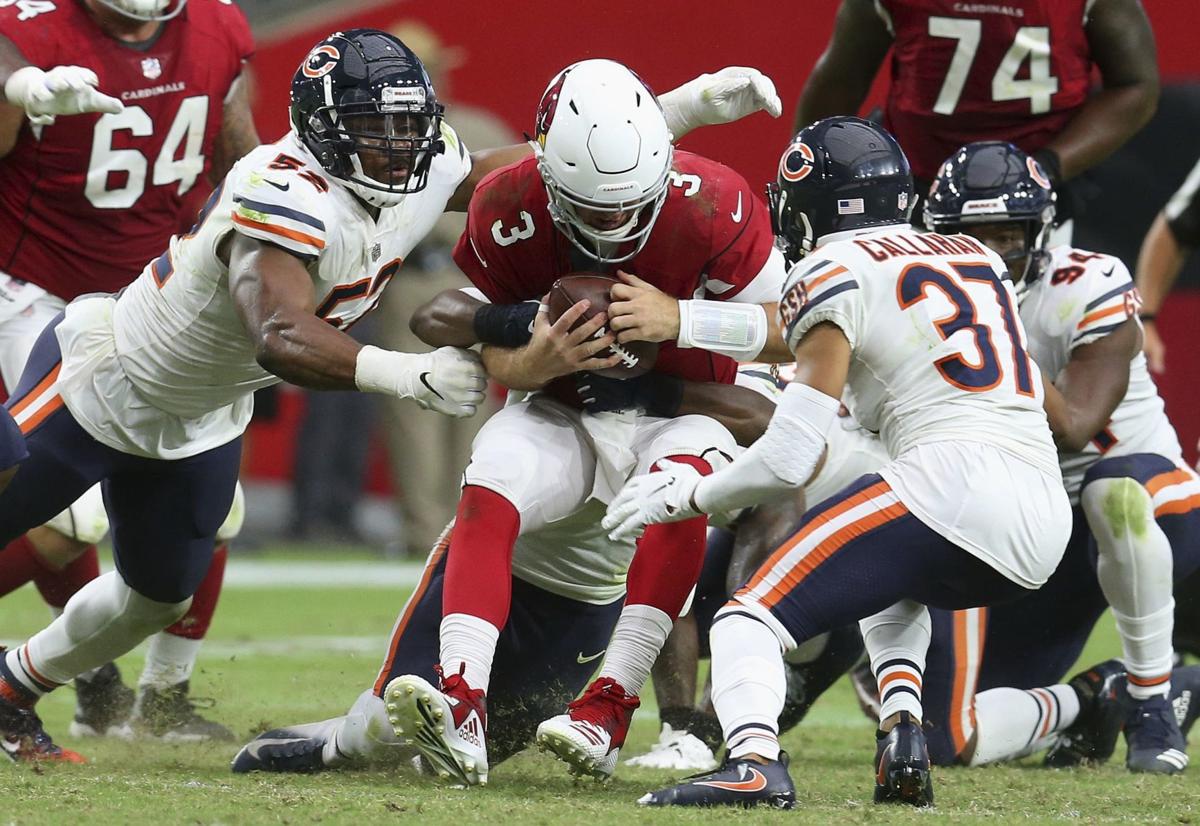 This matchup was definitely not the game many analysts talked about this week. It was between two teams that really struggle moving the ball. Throughout the first 3 games of the season, Chicago is 7th worst in total yards per game, and Arizona is in dead last. But personally, I kind of like low scoring games. I feel like it really makes the strategic decisions from the coaches that much more important. And a low scoring game is certainly what we had on Sunday, so let’s get into it.

While it was a defensive battle, the Cardinals certainly got off to a fast start. Arizona scored an opening drive touchdown. This was set up by a nice play call, Arizona came out in a 3 tight end set, but ran a play action pass. Chicago was expecting a run, and they failed to successfully guard Ricky Seals-Jones, who was wide open for a 35 yard touchdown. Another thing worth noting from that drive, Arizona had a 30 yard pass play out of a 4 wide set. This was largely set up by Arizona’s offensive line successfully giving Bradford time to throw, which allowed their play to develop. But what’s more notable about that play, was that it was the only real time it worked. Arizona’s line didn’t get that kind of protection for the rest of the game, and they only picked up a total of 8 yards the other 15 times they passed the ball out of that set. As a whole, it seemed like the more blockers Arizona had in the game, the better off they were when passing the ball. Arizona gained 6.73 yards per passing play out of a standard set, but they did their most damage passing out of a set with multiple tight ends. They only threw the ball with multiple tight ends 4 times, but they gained 65 yards (16.25 yards per play for you math fans out there). They also scored their 2nd touchdown on an interesting play design, so I decided to break it down below.

Chicago’s offense was also ready to come storming out of the gate. They love to run the ball, no matter what set it’s from, and they proved that on the first play of the game. Chicago came out in a 4 wide set, but rushed the ball and gained 17 yards. two plays later they came out in a standard set, and ran the ball for 21 yards. However that drive stalled when Mitchell Trubisky inexplicably sprinted backwards when under pressure and got sacked for a loss of 15 yards. It was really a poor play by him, Chicago would’ve been facing a 31 yard field goal attempt, but instead had to face a 46 yard try, which they missed. As a whole, it seemed like no matter which set Chicago ran, they had about the same amount of success running and throwing the ball. Out of 4 wide sets, Chicago averaged 5.93 yards per passing play, and 5.4 yards per rushing play. And out of standard sets, they averaged 3.7 yards per passing attempt, and 3.21 yards per rushing attempt. However the one set where there was a disparity was out of multiple tight end sets. They gained 5.4 yards per passing play from those sets, but just 2.8 yards per carry. As a whole, neither star running back had a great game on Sunday. David Johnson averaged just 2.6 yards per carry, and Jordan Howard averaged just 2.5. I think both teams made a considerable effort to stop the run, and for the most part it worked out. However I think Arizona for the would expect a passing play when they saw Tarik Cohen in the game, and he took advantage, as he was able to gain 53 yards on just 5 carries. Cohen also had a pivotal run midway through the third quarter. It set things up for Chicago to score their only touchdown, so I decided to break it down below.

I can talk about X’s and O’s all I want, but really, the biggest decision was Arizona taking out Sam Bradford and putting rookie Josh Rosen in the game. In my opinion this move made no sense. Just to be clear, I don’t think this will affect Rosen’s development in any way, I just think this made things a lot more difficult for the Cardinals to win. Bradford had his best game in a Cardinals uniform, he was moving the ball as he averaged 8.3 yards per carry. Obviously turning the ball over 3 times hurt him, however for 1 drive I’d rather have someone who can move the ball well over someone who can’t, but doesn’t turn the ball over. At this point, a turnover is as bad as not getting a first down. Putting a rookie in the most nerve wracking point of the game for his first NFL appearance was a recipe for disaster, I think Arizona should’ve put Rosen in earlier in the game, or not at all. But that’s just my opinion, I’d love to here from someone who feels that it was the correct call, and it just didn’t work out. After all, I’m not an expert, just a moron who likes to talk about sports.