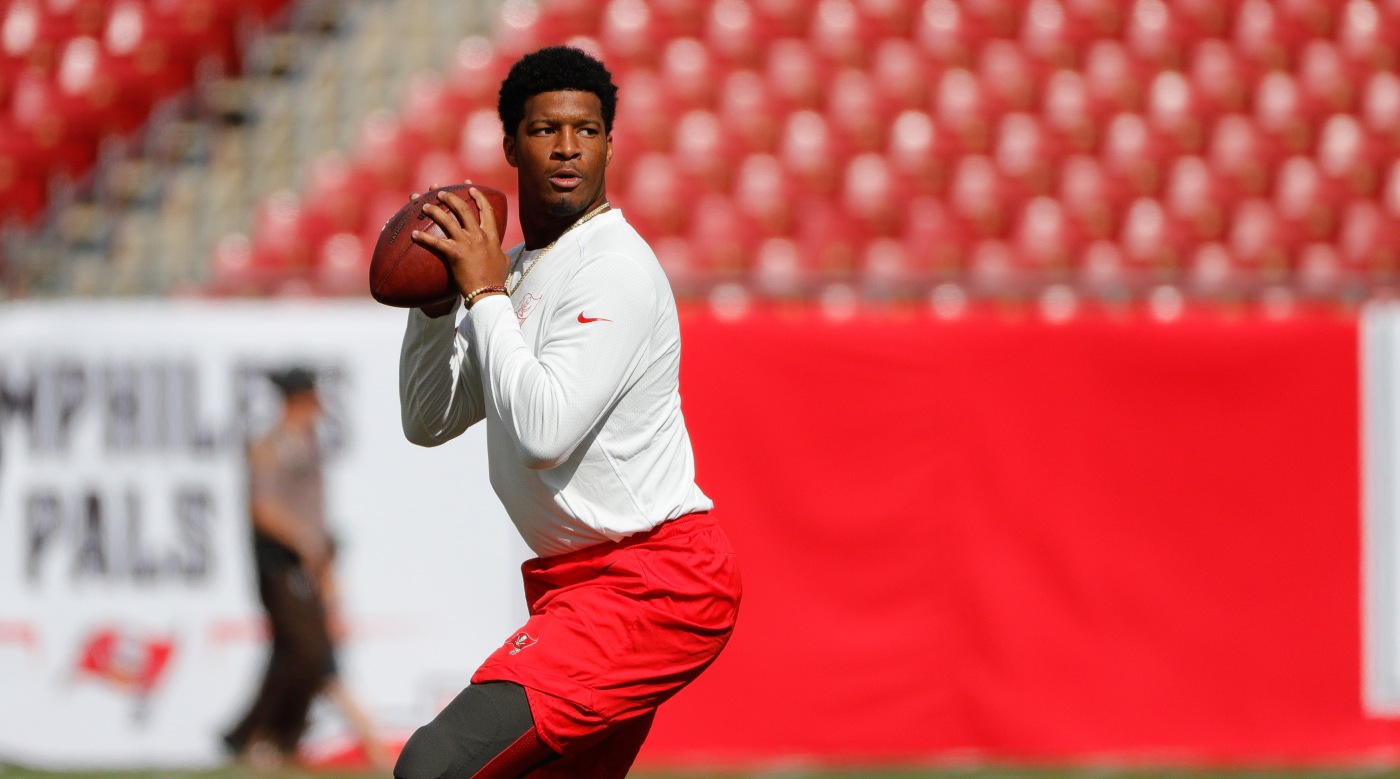 (Note: I am a moron and don’t know anything. I’ve made plenty of mistakes and I’m sure I made some in this article as well. Feel free to let me know how I screwed up by tweeting me @JacksonKrueger. At the end of the day I’m not an expert, just a guy having fun by talking about sports. Hope you enjoy.)

Ryan Fitzpatrick might’ve had the best game of his career week 1. He threw for 417 yards, rushed for 39 more, and had 5 total touchdowns (4 passing 1 rushing). He was even my pick for MVP of week one. This has started a quarterback controversy for some poeple. On “NFL Gameday Prime”, Shannon Sharpe, Deion Sanders and LaDainian Tomlinson all said that if Tampa Bay wins one more game during Winston’s suspension, they should keep Fitzpatrick as a starter. In my personal opinion, keeping Fitzpatrick as a starter would be very dumb, and here’s why.

Peter Schrager on “Good Morning Football” said something that I found odd. He said “Jameis Winston has never played a game that good”. This is a bit debatable, but probably true. Winston did throw for 405 yards and 3 touchdowns against the Rams in 2016, and he threw for 5 touchdowns against Philadelphia in his rookie year, but it’s probably fair to say that Fitzpatrick had a better performance last Sunday than any of Winston’s games. So that argument might work if Fitzpatrick had only played a couple of games, but this is a guy who’s played 133 games in the NFL. To say Fitzpatrick is the better option because he’s better than Jameis Winston when he plays the best game of his career is silly.

I think there’s a few comparisons that could be made about this situation, first there’s Case Keenum with the Vikings. When Bradford went down with an injury, Keenum came in and played pretty well. He wasn’t dominant but he got the job done. When Bridgewater and Bradford became healthy again, the Vikings decided to keep Keenum in since they’ve been winning games with him. They won their first playoff game, but got crushed by the Eagles, and Keenum only averaged 5.65 yards per attempt. While it didn’t work out, it made some sense, Keenum had never really been put in a situation to succeed, so they wanted to see what they could get from him. A year before Dallas did the same thing, when Romo went down, Prescott became their starter, and once Romo became healthy again they decided to keep Prescott as their starter. He played fine in their playoff game, however they lost. Neither one of those situations really worked out, but I certainly understand the logic behind them. Keenum had only played 26 games with 2 franchises who’ve struggled mightily at developing quarterbacks. Meanwhile Prescott was a complete unknown, Dallas wanted to see if he could be great. However Fitzpatrick’s far from an unknown. He’s played 133 games in the NFL, with 7 different teams. We’ve never seen an athlete in the NFL become a journeyman to a pro bowl level player at 35, and I doubt he will be the first. Not to mention with those other guys they had 7 and 11 games to prove themselves. Fitzpatrick will only play 3 before Jameis comes back from his suspension.

Fitzpatrick’s career yards per attempt is 6.74, meanwhile Jameis averages 7.54 for his career, and he averaged 7.93 last year, which was fourth best in the NFL. Clearly Winston is the better player, and many forget he’s only 24. A quarterback has never hit their prime before the age of 24 in NFL history, so there’s plenty of reasons to expect Winston to continue to get better.

I’m going to use a quote from  touchdownwire.usatoday.com. On an article about Fitzpatrick they stated,

“if [Fitzpatrick] leads the Bucs to a 3-0 or even 2-1 start. He’s proven he can lead a team, and given Winston’s inconsistent play at the position, Fitzpatrick could be the missing piece to get Tampa Bay back to the postseason.”

I picked this quote out because I feel it perfectly describes my counterargument. Let’s unpack it, first the idea that if Tampa Bay wins another game or two with Fitzpatrick then he should start doesn’t really make sense. If anything, you should look at how well Fitzpatrick plays, not how the team does. If they win a game 13-10 does that mean Fitzpatrick should then start? And if they lose 42-45 then should he be benched? If you do feel that Fitzpatrick could be a starter, I think it’s at least fair to say we should look at how he plays, not how well the team does. The next part of that quote about Winston’s inconsistency is almost a fair point, however Fitzpatrick is the king of inconsistency. In 2014 he threw 6 touchdowns against Tennessee, and they proceeded to throw just 135 yards and no touchdowns in his very next game. For their final point, I do think it’s possible that Fitzpatrick could take Tampa Bay to the playoffs. He’s a solid player, and with all the firepower the Buccaneers have on offense he’d probably do fine. However the goal isn’t to make the playoffs, it’s to win the Super Bowl, and there’s no chance Tampa Bay’s winning a Super Bowl with Ryan Fitzpatrick as their quarterback. While it’s certainly not a great chance with Winston, it’s still a chance. At the end of the day you have to put your best players on the field if you’re going to be successful in the NFL.

While I do feel strongly about all those points, here’s what really annoys me about the fact that people keep having this conversation. People aren’t being genuine about why they think Fitzpatrick should start over Winston. Jameis Winston has has a ton of off the field issues, and many wish that he wouldn’t be in the NFL. However most people don’t want to come out and say that they should get rid of him due to those issues (some do, but most don’t). If Fitzpatrick were to take over the starting job, Winston would be out of the public eye, without having it being because of his sexual harassment scandal. However the problem is that Fitzpatrick isn’t a better quarterback than Winston, and the people who say he might be are being disingenuous. If you personally feel that Tampa Bay shouldn’t have the face of their franchise be a man who’s been accused of sexual misconduct multiple times, then that’s completely fair. It’s a totally reasonable argument. But to pretend that a guy who’s been a career backup for 13 seasons has all the sudden become a starting quarterback is just not true.

But that’s just my opinion, typically most of these articles are all about facts and data, but I decided to do something a little different with this one and make it more of an opinion piece. I’d love to know what you thought of it, let me know in the comments below, or tweet me @jacksonkrueger. I’d also like to know from the people who disagree with me, perhaps there’s a valid reason to start Fitzpatrick that I hadn’t thought of. As always, thanks for reading.